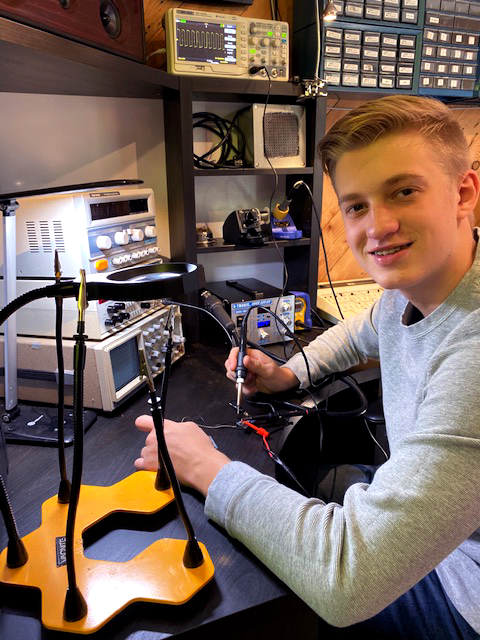 Fifteen-year-old John Madland has always had an inventive curiosity. Growing up, he would ask for broken appliances as birthday gifts so that he could fix them. “I rarely give up on an idea,” he says. “Even if it takes several years to, I’ll solve the problem.”

His penchant for invention and STEM runs in the family. John’s father is a science teacher, and his grandfather is, as John describes him, “a crazy inventor, so I’ve learned a lot from him.”

Last year, John won the Lemelson Award for Invention at the 2018 Broadcom MASTERS, a competition sponsored by the Society for Science & the Public that seeks to inspire young scientists, engineers and innovators who will solve the challenges of the future. This week, thirty middle school students from across the country will again be competing in Washington, D.C. for their chance to win prize money for their work.

John’s winning invention was designed for an out-of-this-world problem. “I built a working model of a satellite that could orbit Mars to protect future astronauts from solar radiation,” John said. “It involves sending a magnet inside of the orbit to deflect the charged particles coming from the sun around the future colony.”

He was inspired to tackle this particular issue when he took a tour of NASA’s Jet Propulsion Laboratory. After building his own ion engine in the sixth grade, John was introduced to Dr. Richard Hofer at the JPL, who is the Supervisor of their Electric Propulsion group. Dr. Hofer showed him the enormous, walk-in vacuum chambers used to test ion engines, as well as the Mars 2020 rover, which directed John’s interest toward space exploration.

But John was not a lone inventor. He worked extensively on the design, while his partner, Mihir Joshi, handled much of the math, and helped John scale their model up to see how effective their project would be. “We both spent hours working in my garage and my electronics lab getting the project to work right,” he said.

John also learned the importance of tapping into a community for assistance. When issues arose, he was encouraged to reach out to other inventors and mentors like Dr. Hofer. He was delighted when they actually wrote back with helpful advice for navigating trouble spots. His local electronics shop owner also made himself available to help work out any issues in his designs. And of course, there was always YouTube for guidance and inspiration.

The Madland family was ecstatic to hear of John’s win. “It was such an amazing thing for him to go to Broadcom and meet other kids as passionate as he is,” said John’s mother, Jennifer Madland. “It was really a life-changing event for him.”

She explains that he’s been a curious inventor since about the time he could talk. “We actually had to give him a whole room of our house for his lab.” Figuring out how things work fueled his inventive spirit, to the point that he’s looking to the stars for challenges to solve.

Now in his first year of high school, John has a host of other interests to apply his creativity and persistence to. He runs his own DJ and lighting business on the side, swims competitively, and participates in his school’s DECA chapter learning about entrepreneurship. And he’s currently working on a motion-sensor, scissor-lift contraption to provide a few scares during Halloween.

To future competitors and other young inventors, John emphasizes the importance of persistence. “Obviously you can’t give up,” he said, “even if it gets really hard. You have to work through it.”

With his prize money John has purchased a welder of his own and has taken his tinkering to the next level. He already has plans in motion for future projects, including developing a small-scale fusion reactor in his garage.

Are the Madlands ready for that possibility? John’s mother says yes. “I’m afraid he now has the skills to actually build it,” she said. “So we’re just kind of bracing ourselves for this.”

The Foundation is working with ABET to support environmentally responsible engineering