It was a deadly pathogen that turned Jason Kang and his friends into inventors. But it’s not the one you’re thinking of.

In 2014, Ebola was ravaging West Africa. Kang was a junior at Columbia University at the time. Like many other people, he wanted to help but felt there was little he could do. What Kang didn’t know was that that six years later, he would be a co-founder of a company and hold a patent on an invention that could help save lives during the next global viral outbreak.

Initially, Kang found his way to help through Columbia’s Ebola Design Challenge. It was a contest that challenged students to quickly invent a low-cost tech solution to an issue related to the disease—think of it like a hack-a-thon for global health. The program brought in first responders and infectious disease experts who described the real challenges they were facing in the field.

Kang and his classmates, Katherine Jin and Kevin Tyan, were all interested in global health and medicine. “We kind of just jumped at the chance to do work on a project that might be able to help protect people’s lives,” says Kang. They decided to form a team to focus on the problem of decontamination.

A lot of the healthcare workers they talked to described the difficulty of working with disinfectants like bleach. “Because it’s transparent, you can’t really see where you’re applying it, and you tend to miss a lot of spots,” he explains. “Have you gotten every single square inch of your HazMat suit, every nook, cranny and wrinkle?”

Another problem is that disinfectants have a tendency to bead up and form droplets that roll off waterproof surfaces. “If you imagine rain rolling off an umbrella, the same thing happens with surfaces like HazMat suits or medical tents, and you get all these gaps in coverage.”

These are common problems with disinfection in general, and that’s why there’s a high degree of human error. Studies have shown that more than 50 percent of surfaces are not cleaned properly. And even when they are, disinfectants are often wiped away before they’ve had enough time to remain on the surface and really do their job.

When it comes to a dangerous viral or bacterial disease, that could mean the difference between life and death. During the Ebola crisis, more than 881 healthcare workers were infected because of improper disinfection, and 513 died. Kang and his classmates decided to come up with something to change that.

Their invention, which they’ve branded Highlight®, is an additive for bleach-based solutions that tackles the visual problem with disinfection by causing the solution to turn temporarily blue after it’s applied. This provides real-time feedback on which areas have been properly sanitized and which areas have been missed. 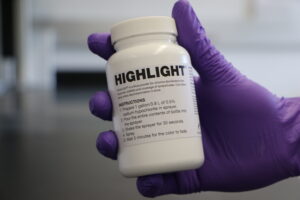 The color fades after about three minutes which prevents staining, but also provides a crucial visual cue. Three minutes is roughly the amount of time needed to kill pathogens. “The color fades from blue to colorless after a few minutes to approximate when the contact time has been met and decontamination is done.”

For 20 years researchers had been working to find a way to make disinfection a more visual process. But the same hurdle persisted: How to get the color to last in the product container, yet disappear quickly on the surface after it’s used. Kang and his colleagues’ breakthrough was figuring out the missing piece—a point-of-use additive that allows fine-tuned control over when to add the color and a time-elapsed process that signals effectiveness. 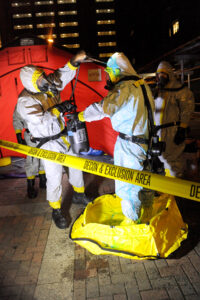 They were thrilled when they made it to the finals in the design challenge. “We thought this was a project we’d put on our resume, and that’s it,” says Kang. But that’s not how it ended for them.

Their invention first got traction with the Fire Department of New York, which invited them to demo the product as part of an Ebola response simulation in 2014. Kang had an organic chemistry midterm the night before and had to make a choice between studying or preparing for their first big presentation as a company. He chose the latter. “I completely bombed it, and got a 16 out of 100,” says Kang.

But the demo was successful, and the Fire Department of New York became their first customer. “That’s the moment when we realized we had created something actually useful. We decided to start a company called Kinnos to bring the technology to the world”

Soon after that, Kinnos won a large USAID Fighting Ebola Grand Challenges grant (Kang shrugged off studying for two finals to finish applying for that one). The grant allowed them to connect with a broad network of NGOs working on the front lines of global health. Pretty soon, Highlight® was being field tested in West Africa, and later on in Haiti, Uganda, and the Democratic Republic of Congo in response to other epidemics. 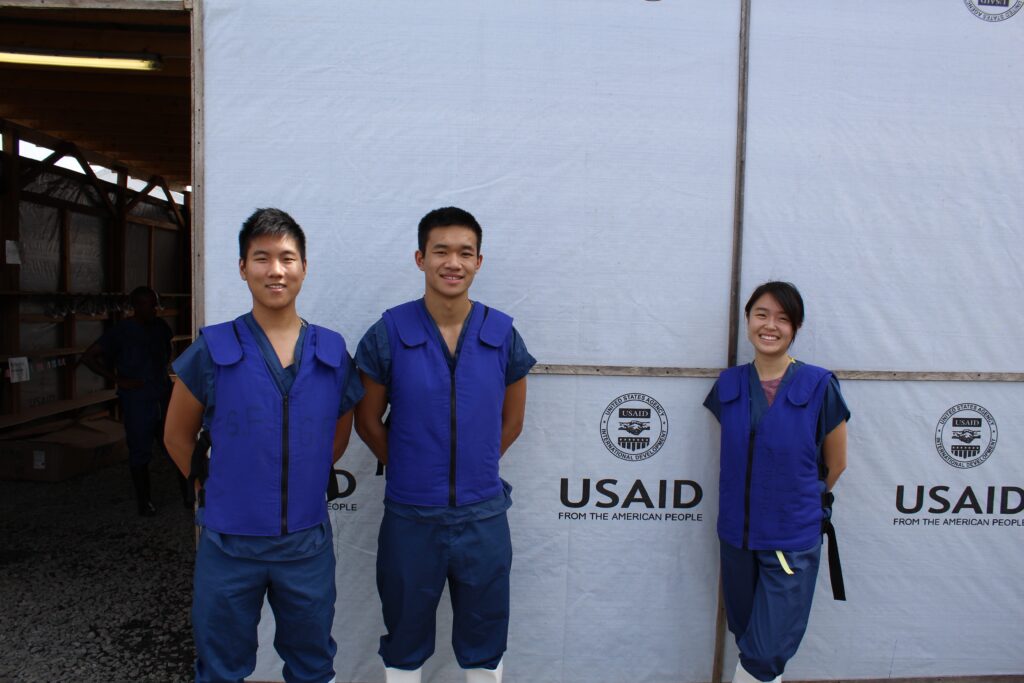 “It’s quite difficult to actually introduce something new in the middle of a crisis,” Kang explains. “I think one of the things we did well to have an immediate impact was to create something really simple to integrate into what healthcare workers were already doing, and not require them to radically overhaul their protocols.”

Kinnos also developed a new product—Highlight® Wipes—geared for everyday use in hospitals and other health care settings. A lid that fits on all standard bleach wipe canisters as well as larger pail and bucket containers, Highlight® Wipes works by delivering Kinnos’s patented additive to a standard wipe as it gets dispensed through the special lid. 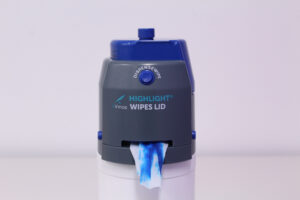 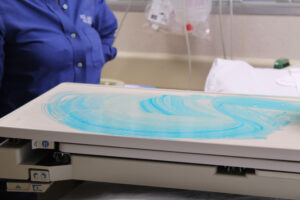 It’s now being used in some hospitals, and Kinnos just received a significant round of investment to further expand. Their next task, says Kang, is to adapt their product to work not only with bleach, but with alcohol-based disinfectants and wipes that are more common for consumer use, particularly during the current COVID-19 pandemic.

Right now, many people are asking the same worried questions during this global health emergency: How do I keep myself and my loved ones safe? When will our lives return to normal? Setting fear aside for a minute, though, Kang offers two more to consider: Who will this virus inspire? What ideas could it spark?

As Kang knows firsthand, catastrophe can be a powerful catalyst for invention. The Ebola outbreak set him and his friends, now business partners, on a path to creating a product and a company that could play an even bigger role during the next global health crisis. In fact, the Kinnos team recently sent shipments of its product to China to help with COVID-19 and is exploring how it can be deployed in the United States.

Pandemics eventually subside, and COVID-19 will be no exception. In the meantime, the crisis is lighting the fire of invention in countless labs, classrooms, and minds around the world.

“If you had asked me what I thought I’d be doing five years out of college, it wouldn’t have been disinfection,” says Kang. But you never know where a solution is going to come from. “In our case, it came from three college students looking for a way to help.”

Jason Kang was a AAAS-Lemelson Invention Ambassador, and his Kinnos team were Lemelson-MIT Student Prize Winners and a VentureWell E-Team.

Read the full interview with Kang on Invention Notebook, and be sure to give the article a clap.