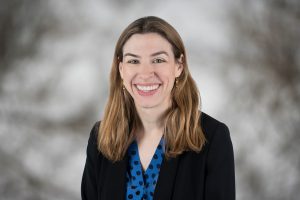 Kara Miller is the host and executive editor of Innovation Hub, which she launched in 2011. Public Radio International took the program national in 2014, and it now airs on more than 100 stations, including New York, Chicago, Boston, Houston, and Philadelphia.

Innovation Hub is a weekly hour-long radio program that focuses on big ideas and emerging technologies. Kara created the program guided by a genuine interest in how innovation affects our daily lives. During discussions with innovators in various fields, she asks the questions people want to know, and helps us see how people are thinking in new ways.

A former college professor, Kara also has a passion for education. Innovation Hub has repeatedly covered topics relating to STEM in U.S. secondary and higher education, primarily the ways in which it is failing to prepare students for the changing work landscape, with an eye towards engaging kids in hands-on STEM and creativity.

As a host, Kara has interviewed Steve Wozniak, Sherry Turkle, Jared Diamond, Sal Khan, Yo-Yo Ma, Garry Kasparov, and Marissa Mayer, among others. Her writing has appeared in The Boston Globe, The National Journal, The Boston Herald, TheAtlantic.com, The Huffington Post and The International Herald Tribune.

Kara has also contributed to other national radio programs, including “The Takeaway,” “Marketplace Tech,” and “The World.”

Kara has moderated panels and spoken about innovation and entrepreneurship at events hosted by The International Women’s Forum, PBS Digital Media for STEM, Harvard Medical School, Google, and MIT Sloan.

Kara has been a contributor to WGBH’s programming since 2008. She worked as an assistant professor at the University of Massachusetts for three years and an adjunct professor at Babson College for two years. Kara holds a Ph.D. from Tufts and a B.A. from Yale.