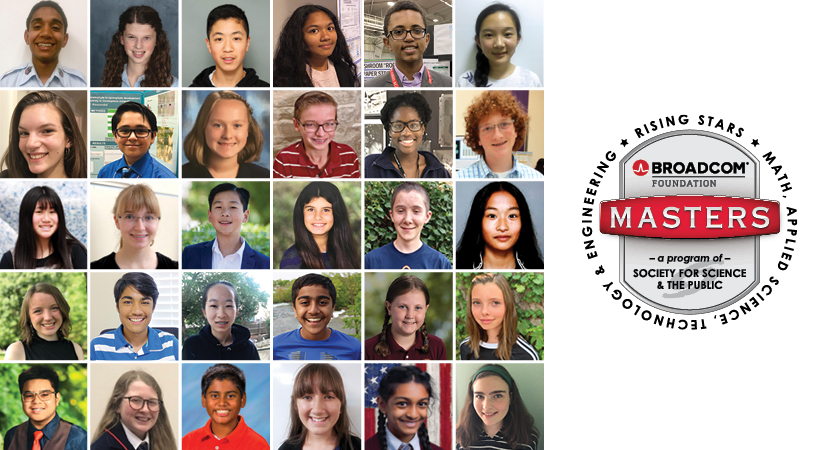 The Lemelson Foundation is proud to sponsor the Lemelson Award for Invention, awarded to a young inventor creating promising solutions to real-world problems.

Broadcom MASTERS (Math, Applied Science, Technology and Engineering for Rising Stars), a program founded and produced by the Society for Science & the Public, seeks to inspire young scientists, engineers and innovators who will solve the grand challenges of the future.

The Lemelson Foundation is proud to sponsor the Lemelson Award for Invention, awarded to a young inventor creating promising solutions to real-world problems.

“Congratulations to all our amazing finalists!” said Paula Golden, President of the Broadcom Foundation. “It is exciting to see so many young women scientists and engineers – 60% – in the competition this year. I believe that this bodes well for achieving greater gender equity in future STEM careers.”

The finalists will travel to Washington, DC from October 25 – 30 where they will participate in a rigorous competition that leverages Project-based Learning to test and demonstrate their mastery of 21st Century skills of critical thinking, communication, creativity and collaboration in each of the STEM areas.

In addition to participating in team challenges, the finalists will meet with government officials on October 29 and showcase their projects for the public during a free event at the University of the District of Columbia on October 26 from 1-3:30 p.m. Winners will be named during an awards ceremony on October 29 at the Sidney Harman Hall.

“I applaud our top 30 Broadcom MASTERS finalists and look forward to meeting them in Washington, DC,” said Maya Ajmera, President & CEO of the Society for Science & the Public and Publisher of Science News. “Although they are only in middle school, these young people are poised to help solve our world’s most intractable problems.”

A full list of the finalists can be viewed here:https://student.societyforscience.org/broadcom-masters-2019-finalists.

The Broadcom MASTERS is the only middle school STEM competition that leverages Society-affiliated science fairs as a crucial component of the STEM talent pipeline. Only the top 10 percent of 6th, 7th, and 8th grade projects entered into Society-affiliated fairs around the country are eligible to apply.

All finalists receive a $500 cash award and an all-expense paid trip to Washington, DC, for the competition, where they will compete for the following awards:

Broadcom MASTERS recognizes finalists’ science teachers with a one-year classroom subscription to Science News magazine and awards the finalists’ schools with $1,000 each to use toward STEM activities.

About Broadcom FoundationFounded in April 2009, the Broadcom Foundation is a 501(c)(3) nonprofit corporation the mission of advancing science, technology, engineering and math (STEM) education by funding research, recognizing scholarship and increasing opportunity.

The foundation inspires young people to pursue careers in STEM and to develop 21st Century skills of critical thinking, collaboration, communication and creativity.  It is a founding member of the National STEM Funders Network and plays a leadership role in the STEM Education Ecosystem Initiative in the US and Israel.

About Society for Science & the PublicSociety for Science & the Public is dedicated to the achievement of young scientists in independent research and to public engagement in science. Established in 1921, the Society is a nonprofit whose vision is to promote the understanding and appreciation of science and the vital role it plays in human advancement. Through its world-class competitions, including the Regeneron Science Talent Search, the International Science and Engineering Fair, and the Broadcom MASTERS, and its award-winning magazine, Science News and Science News for Students, Society for Science & the Public is committed to inform, educate, and inspire. Learn more at www.societyforscience.org and follow us on Facebook, Twitter, Instagram and Snapchat (Society4Science).